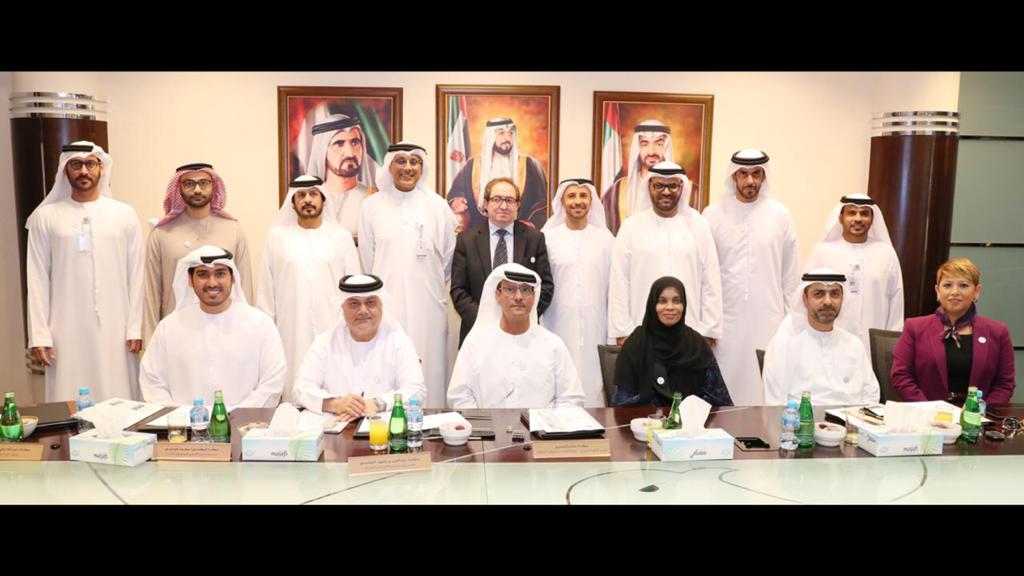 ABU DHABI, February 21, / The Higher Colleges of Technology - represented by the Center of Excellence for Applied Research and Training (CERT), in cooperation with the Ministry of Finance - has launched a "Value Added Tax Academy", in line with the state's implementation of value-added tax since the beginning of this year.

The Academy - which is the first in this field - is an officially approved body to grant professional qualifications and prepare specialists in the tax field, in addition to its role in training and community awareness of the tax system.

The inauguration ceremony of the Academy was attended by Dr. Abdullatif Al Shamsi, President and CEO of the Higher Colleges of Technology, His Excellency Yunus Haji Al Khoury, Undersecretary of the Ministry of Finance, Abdullah Musleh Al Ahbabi, Acting Undersecretary of the Finance Department, Dr. Muhammad Baka, Chief Executive Officer of the Centre of Excellence for Applied Research and Training "Cert", and a number of officials and strategic partners.

Dr. Abdullatif Al Shamsi stressed the importance of CERT's approach to the launch of a "Value Added Tax Academy", in line with the economic changes in the country since the introduction of the value added tax in the UAE in January 2018 to support the state's efforts to strengthen the national economy.

He stated that the application of the value-added tax imposed functional variables and the need for competencies in tax transactions, in addition to the need to spread awareness of the added value tax among institutions and individuals.

He added that the Higher Colleges of Technology represented by "CERT" was keen to play an active role by launching a value-added tax academy that provides the competencies required to meet the needs of the labour market and support the national vision. The academy will offer professional qualifications to international standards that prepare students to work as tax agents.

For his part, His Excellency Younes Haji Al-Khoury, Undersecretary of the Ministry of Finance, expressed his happiness in cooperating with the Higher Colleges of Technology represented by the Applied Research and Training Center "CERT" in launching the value-added tax academy, which supports the state's efforts to introduce and spread awareness about tax in society and develop professional competencies. In order to manage financial change and variability in institutions with the application of the tax, the academy  represents an important step forward in promoting  tax responsibility and commitment among different entities, in accordance with executive regulations.

He pointed out that with the implementation of the value-added tax, we have a need for about 3,400 jobs, and this academy will contribute to providing national competencies to fill these jobs, in which those enrolled will have greater opportunities for employment in the labor market.

His Excellency the Undersecretary of the Ministry of Finance considered that this cooperation between the Ministry of Finance and a well-established educational institution such as the Higher Colleges of Technology through the "CERT" Center reflects awareness of the role the colleges play to keep pace with changes and developments and contribute to strengthening national trends while supporting the state's efforts in the fields of economic development through value-added tax. Sustainability at the economic level and providing the best government services in the future are essential for the benefit of all members of society.

For his part, Dr. Mohamed Baka, CEO of CERT, explained that the VAT Academy came within the framework of awareness of the objectives of the federal government and the strategic plan of the Ministry of Finance 2017/2021, as well as Abu Dhabi Vision 2030 to diversify sources of income and reduce dependence on oil, as the academy was established in accordance with relevant global standards and principles. With taxes, the academy offers three levels of education and training, including providing professional certificates for preparing specialists in tax work, training and qualification programs for employees, in addition to executive and awareness workshops on the application of the tax system.

He added that the VAT Academy has an integrated curriculum of 8 training modules that range in specialization within the framework of tax professionalism, including the tax legal framework of the UAE, tax accounting, complex scenarios for the application of value-added tax, work ethics, professional behavior, tax risk management, compliance, tax systems automation, auditing and data analysis.